My first sentence is going to be fairly simple, I LOVED OUR FIRST YEAR 6 CONFERENCE!

On Tuesday last week, all of the year 6s got together at our first year 6 conference! We made new friends and long lasting connections with each other. We did multiple team building

activities including a cup stacking challenge, a news paper tower challenge and a physical challenge. Because there was roughly 150 of us, NOT  including teachers, we were broken up into separate colour groups. I was in the Dark Blue group with 8 other students. In this post I will be telling you about the challenges we participated in, and how the day went! Let’s get stared!

We started off the day in a big hall, in a circle, getting to know some knew faces. After a short time, we were told of our first challenge, a NEWSPAPER TOWER challenge. We had one newspaper, and a role of masking tape. We had to work together and not be afraid to speak up if we had and idea. We were required to build the tallest tower we could.  In the end, we managed to make a tower that was taller than 30cm! I think that we did a great job and worked well together! 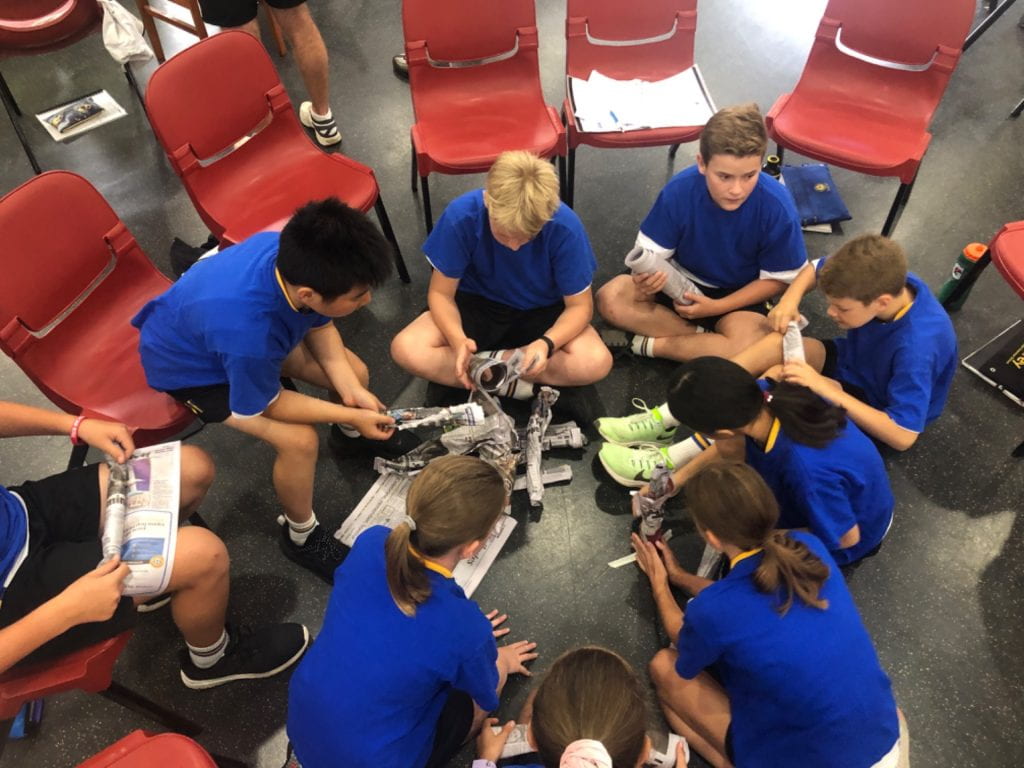 The next activity was a CUP STACKING challenge. We had 6 cups, a 1 metre long string, 2 rubber bands and scissors. You may say that making the biggest tower with those objects is pretty easy, but what if we told you that no part of your body or the scissors could touch the cups? This challenge took a lot of trial and error, but in the end, we made a cup tower that had 2 cups at the bottom supporting the structure and we balanced the remaining cups (4) on top of that. There was a lot of yelling and screaming “Don’t touch the tower! You’ll nock it over!” But we got through it and did well. But about 3 minuets after we had finished our cup challenge, we had to nock it over. Our group was not happy at all, but it was for the best.

We did no approve of this at all. but there was a twist, only 50% of our group had to be up in a plank at at time. The challenge started and we held our planks. If we wanted to swap out, we could ask someone that was down to cover us. After the challenge had finished, the teachers told us the point of this exercise. They said that the point was communication, if we were tired and we felt like we couldn’t keep going, it wasn’t fair on our team to drop out without telling anybody because then we would be out. Remembering that we had to have 50% up at all times. There was a winning team at the end, and they were told that they would get a special prize, but in the end, we all got an icy pole to end the day.

We al had an amazing day, and made great new connections with our new found friends! I can’t wait for our next year 6 conference, and to have another amazing day! Try these activities at your school, at home or anywhere else! Talk to you soon!

Which one of these activities would you try? Explain why!